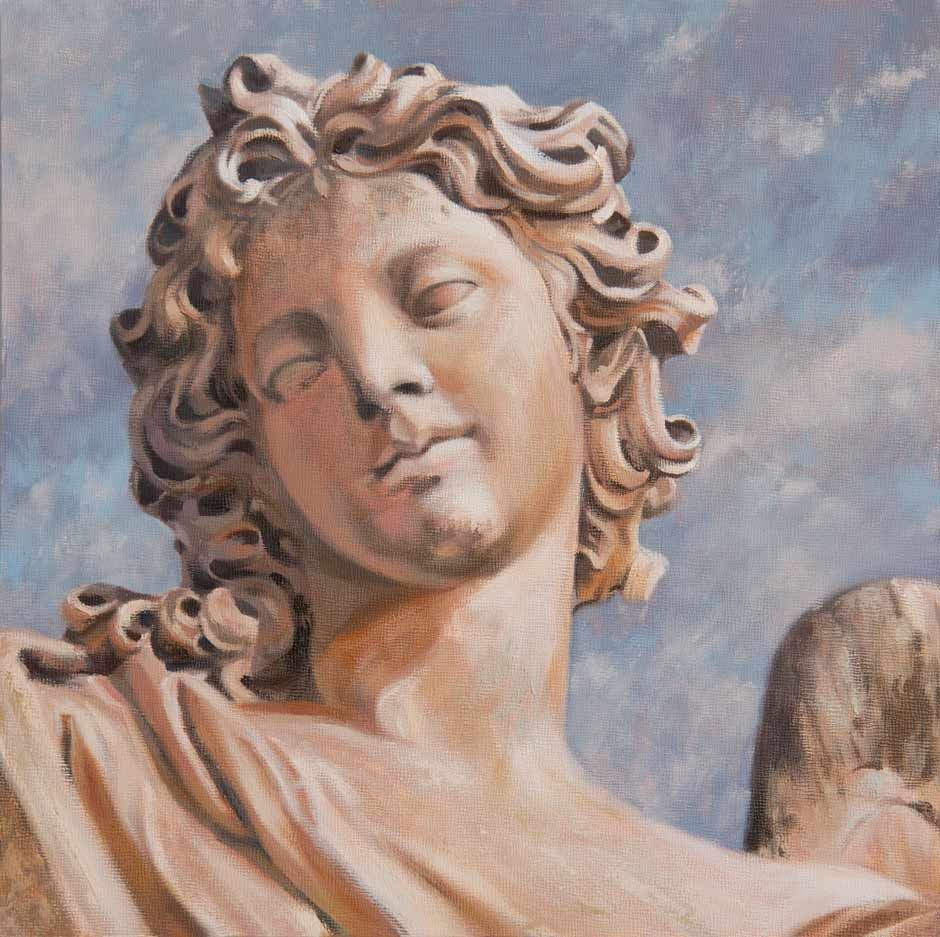 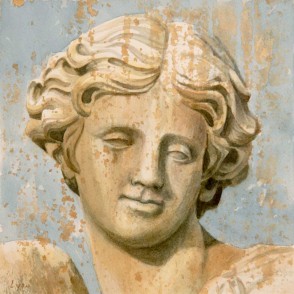 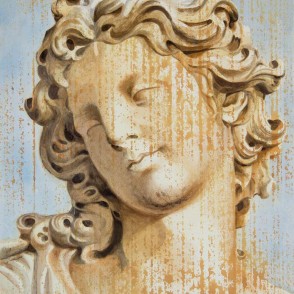 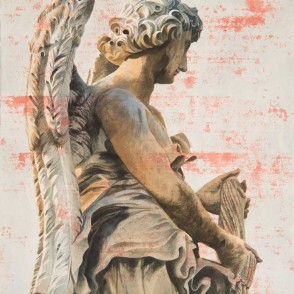 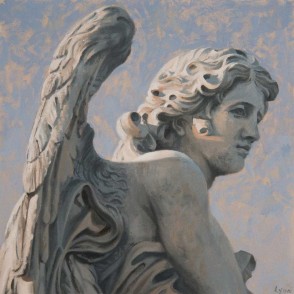 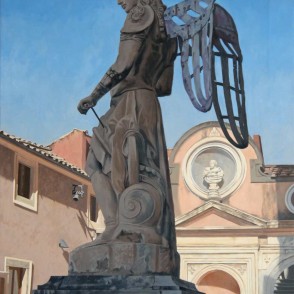 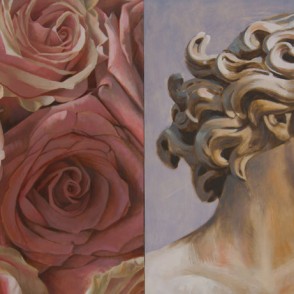 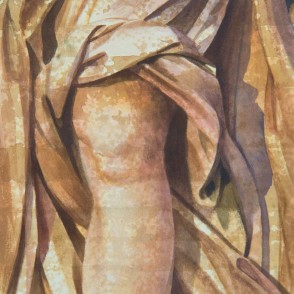 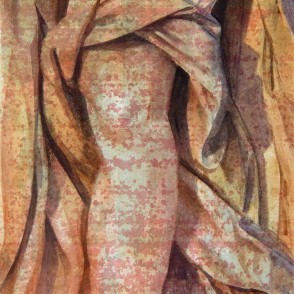 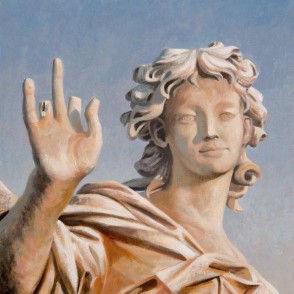 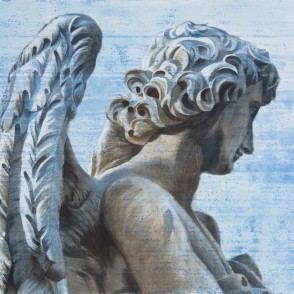 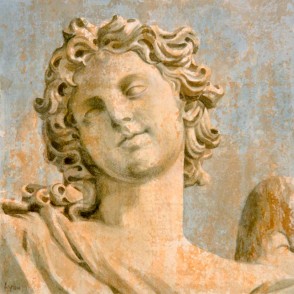 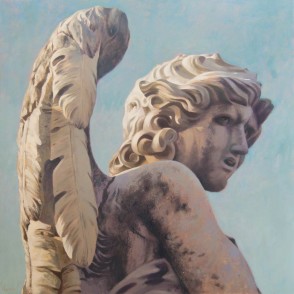 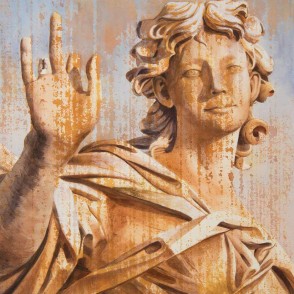 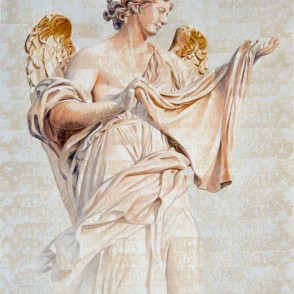 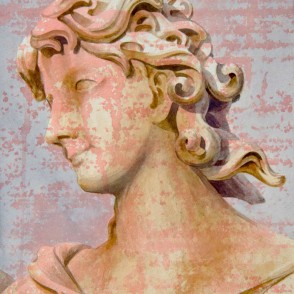 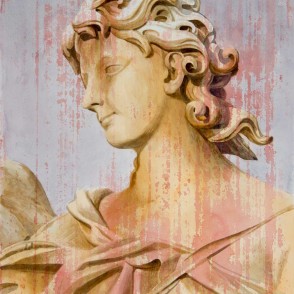 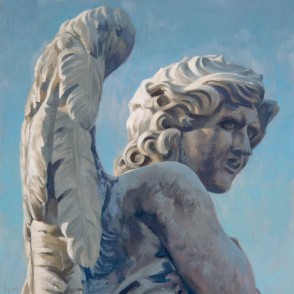 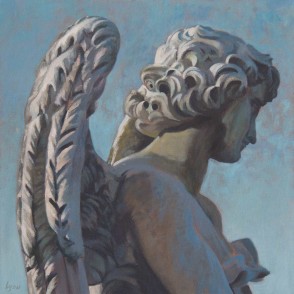 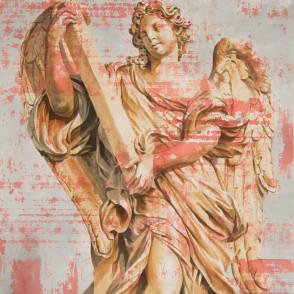 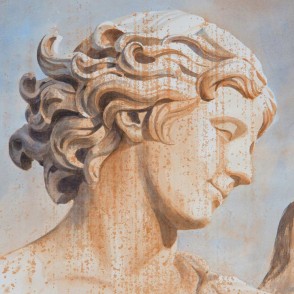 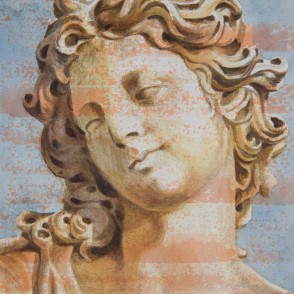 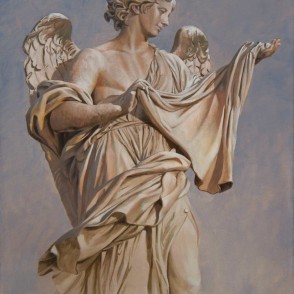 Known for his luscious oil paintings of garden flowers, Charles Lyon turns toward new subject matter for this exhibition. A recent trip to Rome left a rich impression on the artist. In particular, he was drawn to Bernini’s dramatic baroque statuaries of angels on the Ponte Sant’Angelo. This Bridge of Angels spans the Tiber River, and is graced by ten sculptures, each created to symbolize parts of the story of Jesus Christ’s suffering and crucifixion. Inspired by their towering presence, Lyon photographed the statues and used the images as a reference. Comprised of oil and watercolor paintings, Lyon’s images have a soft, nearly monochromatic palette. Texture is created through a unique application of paint using Styrofoam to suggest surfaces of travertine and marble.

As Lyon explored some of the most painted religious icons in western art history, he considered the angel’s role as a motif. He explains: “the angel has a long and varied history. Why has it been so dominant and insistent? Values such as compassion, hope, transcendence and even metamorphosis come to mind. They strike me as extraordinary in our internet age … the supermarket of information and images constantly available to us on the web omits aura. The ten statues of angels on Ponte Sant’Angelo have a presence and urgency that I’ve rarely felt anywhere else. Suspended on a bridge, they are simultaneously ominous and benevolent, substantial yet otherworldly. On the bridge, I felt part of a historic axis. To the south and east lies the ancient city. Looking north and west I saw St. Peter’s Basilica and the Vatican. I was standing where pilgrims, religious leaders and tourists have traversed from one epoch to another.”

Lyon settled in Minnesota in 1994 after spending over a decade living in the Arizona high desert where he taught photography, rock climbing and kayaking. Lyon spent much of his artistic career as a photographer, concentrating on black and white images of the natural world. Through his focus on photography, Lyon developed an appreciation for the compositional and formal elements found in nature. But after years of looking at the wilderness through the lens of a camera, the possibilities inherent in other mediums became intriguing. He returned to school to study painting and received his MFA degree from the Minneapolis College of Art and Design in 1999.

Lyon will be present at the opening reception on Saturday, March 7 from 2-5 p.m. This exhibition and opening run concurrently with A Delicate Balance, an exhibition of new paintings by Carl Oltvedt in the Groveland Annex. Both exhibitions will continue through April 18.